It was the boost I needed, a massive boost.

Of course I’m still wiped, what with the smoke in the air, and with a Saturday afternoon of pints-instead-of-naps, I had been dead to the world until today (Thursday). It was my first continuous ride over 90km and first time this year over 70km.

Mentally, it was far more than a ride, it was an overdue lurch forward in the life of a dad who was threateningly lame as he encroaches his 40th birthday (in a month, I’m not scared, bring it).

As my wife put it, when I got back after the ride on Saturday I was in the best mood she’d seen me in for years. Still am.

Bloody good ride it was. It’s all the work you put into it, the rides, after rides, and those nights not drinking from a growler.

Started alone at the back of the pack amongst something like 800 or 1,000 cyclists, and I wasn’t social. I love the energy, I love being with the pack. I was present, I was brimming with excitement, ready for the unexpected, ready for cyclists to do things I’m not used to being around. And I was real quiet. I wasn’t spending a lick of energy I didn’t need to. 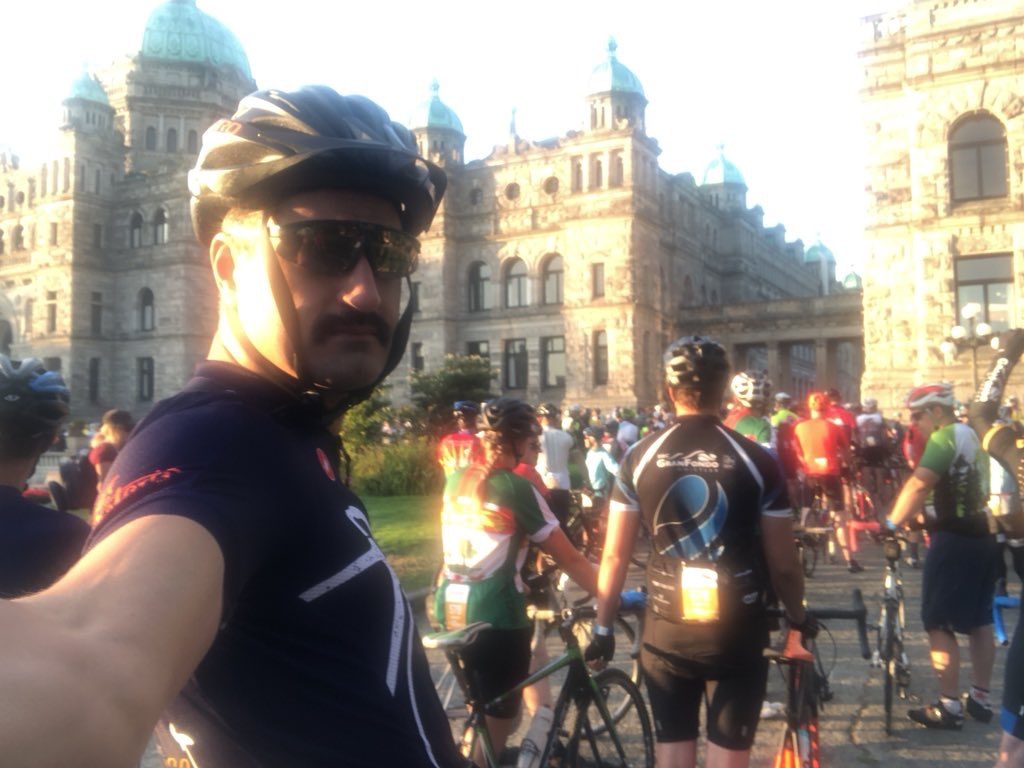 The first 20 kilometres was adrenaline-fuelled and I didn’t really feel anything until Colwood.

Wow. Lagoon Road, the Hatley Castle and ocean views, changed everything. It had all the beauty, and far more, than the two previous 90km TdV I had participated in.

I’m currently an unabashed masters student at Royal Roads and it was a huge fist pump as I used the descent of Fort Rodd Hill to bridge the gap to a group along windy Lagoon Road. Just two months I ago in June I was living at Royal Roads for an intense three weeks (there is a cool KOM there on the campus’ Serpentine Road, really fun). I see now how crucial my time was there in June. Instead of making dinner, many days I jumped on my bike at 4:45 p.m. and rode out to Metchosin, or up to Munn Road, and then got back around 7 p.m. and studied for the rest of the night.

The first big jolt on the 140KM was when we joined the 100KM riders. I had nothing but respect for them, but also, even as many of them shot past me, I felt the boost knowing I already had 40km on them

Then, a profound moment. My life ticked over a new chapter when I turned off the hills of Munn/Millstream and onto Willis Point Road. It was only the halfway point, about 72 km to go, but the mental battle was won.

The rolling hills of Prospect Lake were coming, didn’t matter. That Hastings ramp? Yeah, I heard people complaining about it, but the irony is that was no different than three or four of the same ramps on Millstream. Wasn’t a thing.

For me, the loop through West Saanich was harder than it should have been, and not coincidentally, I cracked on the same hills along Old West Saanich that I cracked on during the bike course of the Aug. 5 triathlon.

After that came Prospect Lake, which I rode pretty easy as I realized that yes, indeed, I had rode the Metchosin leg of the route too fast.

Of course I did.

But the rest of the way, after crossing the Pat Bay Highway into Cordova Bay, I was able to really enjoy it while pedalling at a decent clip (for me). I skipped the Cordova Bay aid station (in all I hit about half of the aid stations) and clung to a couple (really nice riders) wearing matching Velo Vets kit. I owe them one, they pulled me through, off-and-on, all the way to Cadboro Bay before we split, I believe.

Even if I had wanted to bury myself for the Happy Endings time trial section from Uplands to the finish, I couldn’t have.

Instead, at Gonzalez, I stopped to say hi to my dad who was cheering on the sidewalk. He took a photo of me. That was awesome. 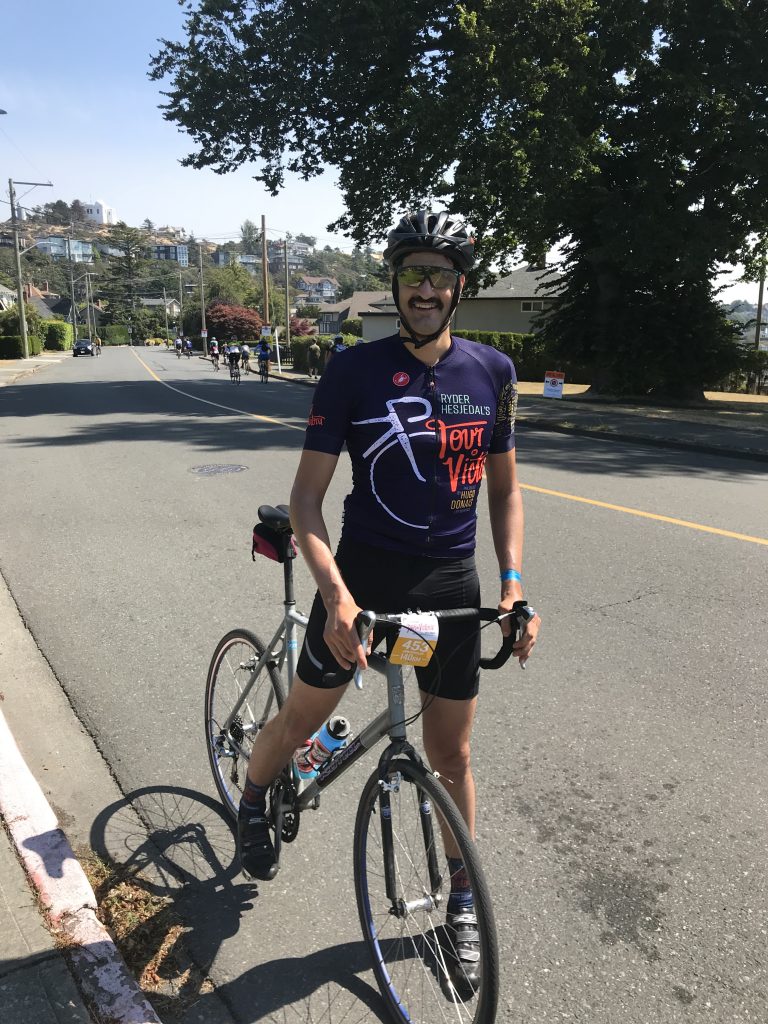 Then, after a good rip along Dallas Road working with a guy in a Tripleshot kit, and fighting through a leg cramp, I pulled off to join a different crowd at Ogden Point. Down on the beach I got a massive welcome, and hug, from ultra marathon swimmer Susan Simmons. I couldn’t believe how great she made me feel, she always does. There she is, about to do a TV hit, sitting relaxed on a driftwood log among dozens of supporters, mentally prepared to do a 24-hour Juan de Fuca double crossing (with no wetsuit) and she made ME feel special. What a person!

I got back on the bike, finished strong. Five hours and 34 minutes, about 30 minutes faster than I thought I’d be.

At this point I am so grateful to my wife @dralexisblanks for running the household (and her practise) while I was basically in training camp at Royal Roads, both for the mind, and the body. She’s an amazing partner.

I’m awestruck that I accomplished 1,885 metres climbed on one ride.

(One thing to add, the fanboy in me truly enjoyed being passed by the 160km elites, who added an extra 20km loop out in Metchosin and Sooke. A breakaway of two riders first caught me right on the top of Munn, their conversation was so intense but casual, I was inspired. Then a peloton of 160km riders caught me on Millstream, on the downhill. It was intense to be passed by them in the S-curve descents. Really cool.) 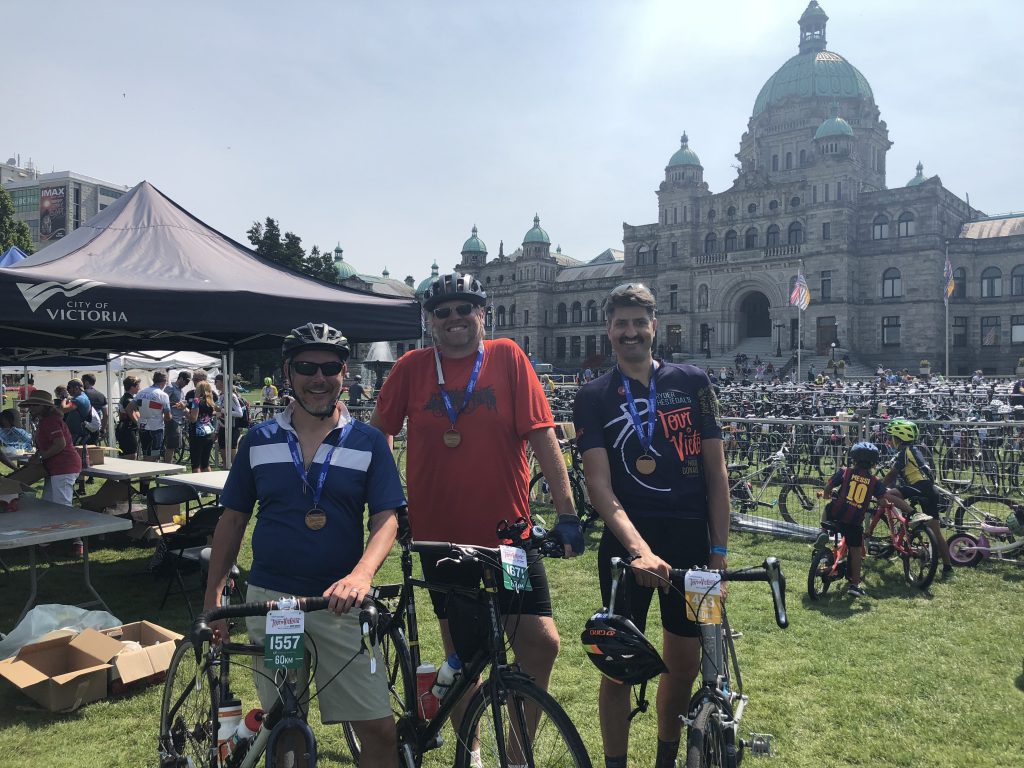 With Mike Hassler & Joe Wiebe, the lieutenant and captain of our team The Thirsty Riders.

Guess we’ll just have to see what distances the Tour de Victoria offers. 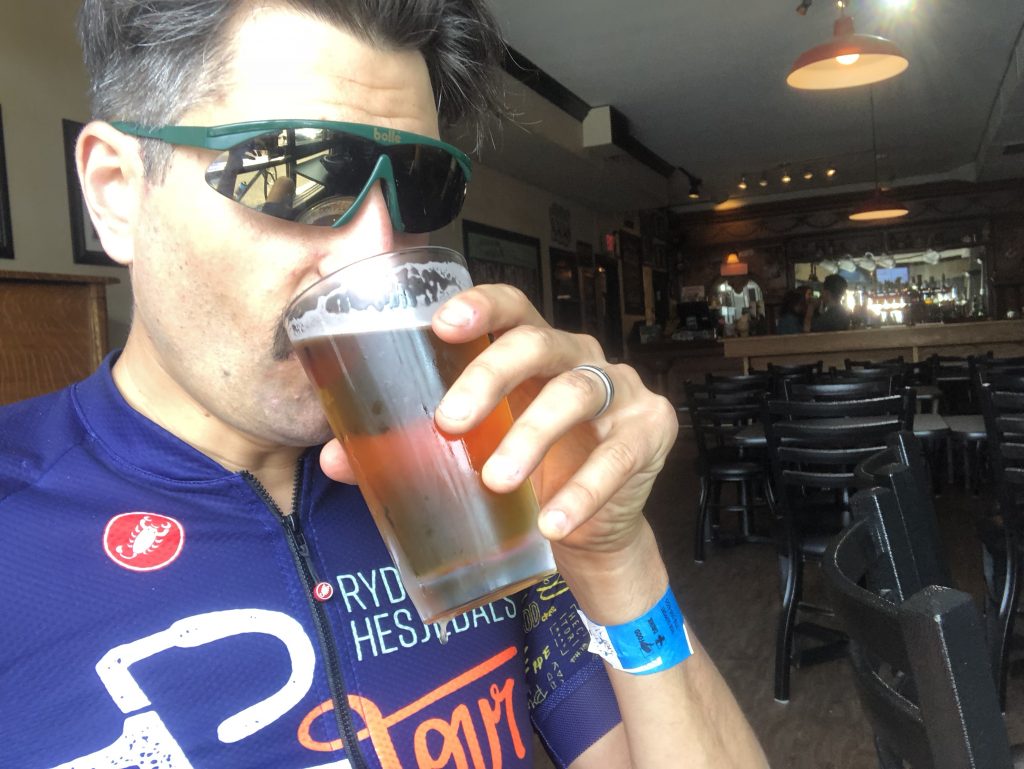 Forgot my key (locked out of the house), so had another celebratory beverage in my new kit. (Selfie)

Posted in Blog and tagged rideVictoria, tour de victoria
← To my riding buddies, thanks for getting me hereWhy the Tour de Victoria really is a ride for everyone! →