Deadlines approach, no turning back now.

The last month has been interesting, not a recipe for event training but it is what it was.

One month to go:

After some extended rest periods, courtesy of Hannah, my physiotherapist, and some common sense, I got the green light to get back on my bike for some easy, “relaxed” rides.  Along with my weekly physio session and daily stretching and exercise routines, I got in a couple of easy rides around North Vancouver and one Silver Wheels ride from Peace Portal around Birch Bay in Washington State.  These were a bit longer than suggested but by the end of July my knee was feeling a bit better (not nearly up to snuff but …) with less stiffening and post-ride pain. 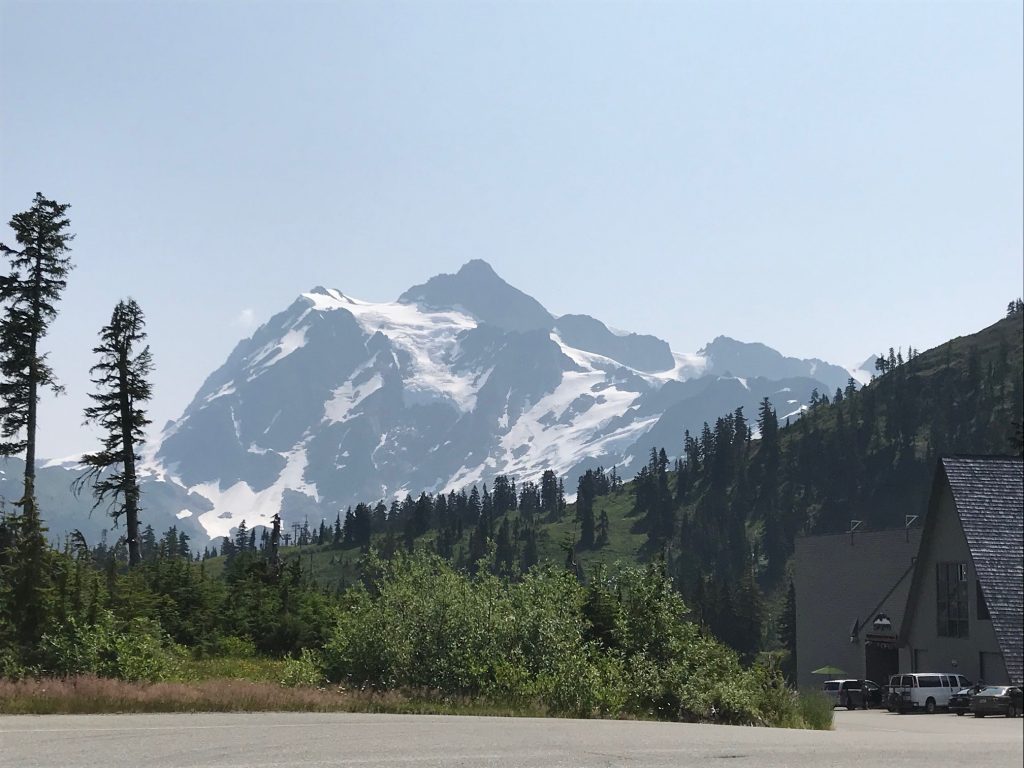 My original plan had included three rides per week with a couple of serious TaG endurance rides including West Vancouver to Squamish and from Sumas to the top of Mount Baker ski area which was also my test ride last year to check fitness and endurance in advance of the TdV.

But I had to cancel both events this year and so my training program was essentially going from 4 weeks off the bike, to a couple of 40-50 km rides to possibly a couple of 100 km rides – I don’t think that would be Ryder’s suggested training build-up but I think (hope) it will work for me – but then I’m not looking to set any records or tear up the TDV course, just survive and finish in a respectable time

However, my physio (she’s the boss) generously allowed me to try a week of 3-50 km rides (easy).  To quote “you can probably do the 140 but might blow up your knee and put yourself back where we started a couple of months ago”.  So, for the long weekend I ended up riding with Kim to UBC, followed up the next day with a Silver Wheels 60km ride from West Vancouver to Ioco via the Barnet Highway with some extended climbing, but not anywhere near my planned program distance. 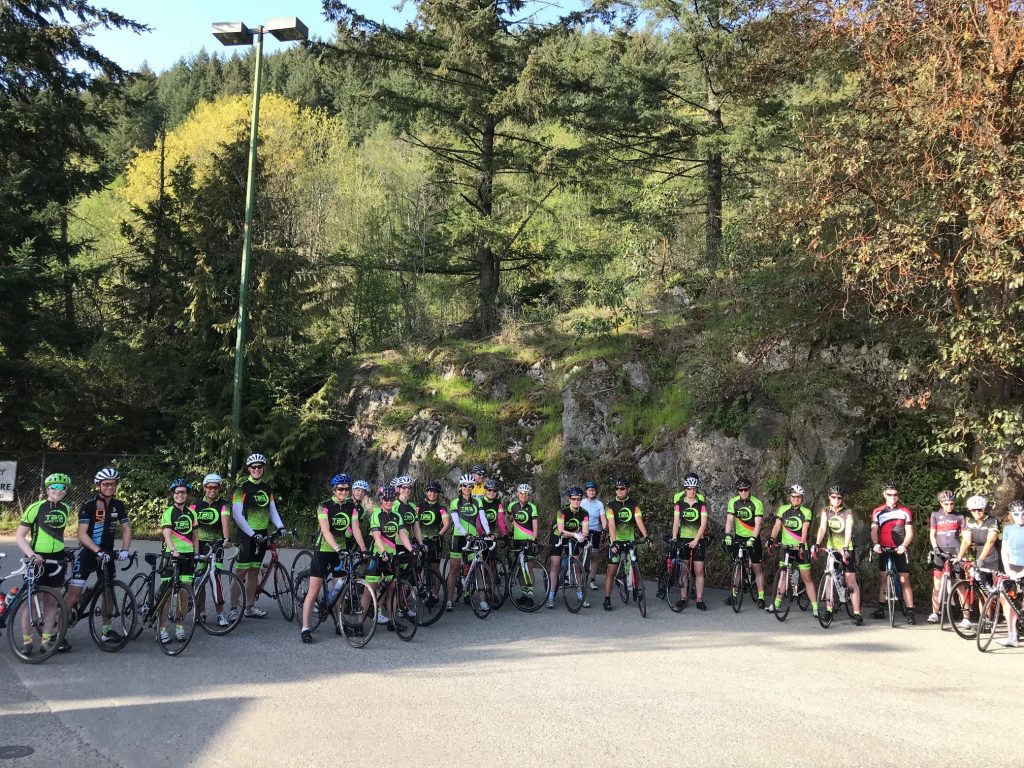 A large group from TaG has been training for hilly riding every week in preparation for the TDV.

After the long weekend, my ride plan was to be a bit more consistent with a couple of relatively easy rides with the Silver Wheels and one more strenuous ride with TaG.  I had planned to participate in the Glotman Simpson Cypress Challenge, a cancer fundraiser involving climbing to the top of Cypress Mountain ski area., but Hannah nixed that idea pretty fast when I described it. 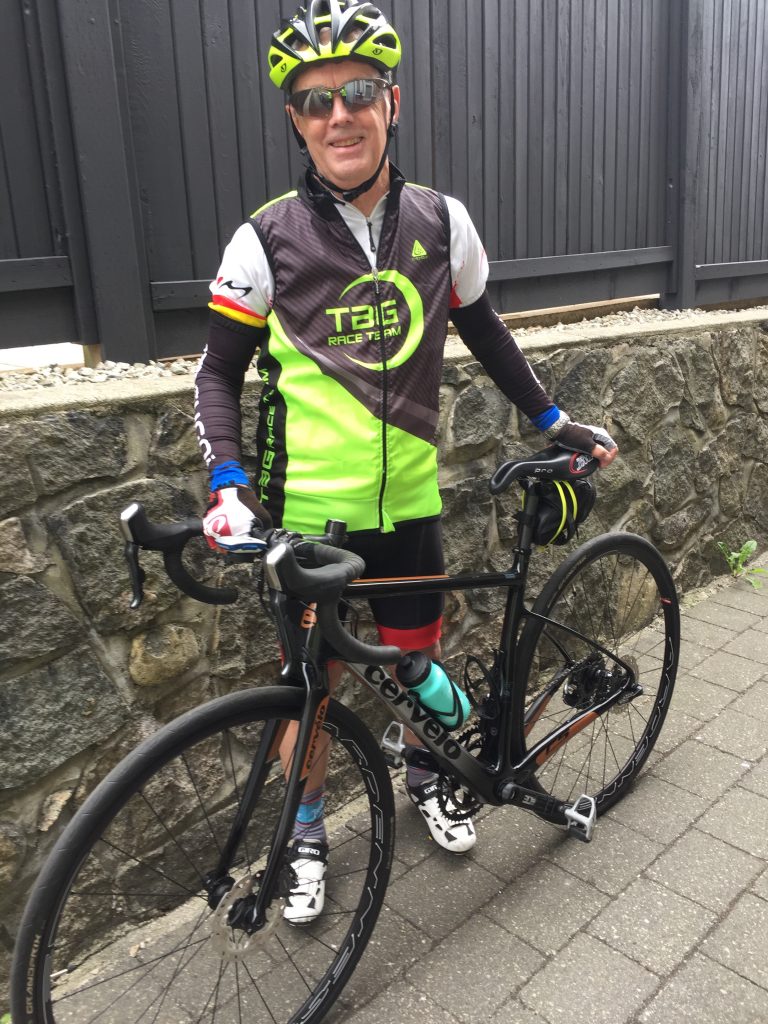 And some good news – since I have obviously not reached N+1 yet (cycling joke), a new bike!!!  A Cervelo S5 with disc brakes and electric shifting – more competent bike than rider (for now).

One week to go:

My plan pretty well went out the window – more knee pain after riding on the long weekend so I’m heading to Victoria with much fewer kms in the bank than hoped for.  Most of the Silver Wheels team will be arriving a couple of days before the TDV and as captain, I plan to lead them on an easy “leg loosener” ride on the Friday before the event.  Probably 20 kms around Victoria.  We have done this every year and I have found it is good to keep turning the legs over the day before a long event rather than resting up.  Keeps reminding the body that there is work to be done.

I know I have the option to change my ride from the Harbour Air 140 km event to the TREK 100 km  event or the Christie Phoenix 60 km event when I register, but since my knee has responded slowly to exercise and treatment, I plan to make the distance decision at the last minute (Hannah says 60 max!).  Unfortunately, after a short, steep test ride around North Vancouver yesterday with Kim, including some climbs in the 15% range, my knee objected, so it might even be 0 kms for me this year – very disappointing but we’ll make the decision Friday.

Good luck to everyone riding in the Ryder Hesjedal Tour de Victoria this year – no matter the distance or pace or whatever your personal goals are.  Keep safe and have fun – see you at the beer garden!

While Sandy’s been sidelined rehabbing his knee I’ve spent the last three weeks limiting myself to cycling with the more social Silver Wheelers.  After starting our season last spring in fairly wet conditions it was nice to finally have mostly dry days but lately the heat has just gotten too much for me. On today’s ride we travelled just under 60 kms in the smoke-filled air from all the wild fires happening around us.  Mind you I started off the morning quite tired after tackling some of North Vancouver’s hills yesterday, approximately 500 meters vertical, and found my throat and eyes were quite irritated from the poor air quality.

At this time, I’d like to thank the Tour de Victoria organizers for developing the Ride Training Programs. Although I haven’t followed it completely it was nice to see I had already incorporated most of their suggestions into my own plan. Both Sandy and I have been attending Pilates classes for a number of years and have found the core work to be very beneficial for our cycling.

I’d also like to thank the TaG Ride Club for offering their Sunday Club training rides and the cycling related seminars. Hopefully I’ll be well fuelled and hydrated on August 18th and if I get a flat during the event I might even be able to fix it on my own! Tonight, Leslie Thomlison hosted a Race/Ride/Event Strategy Seminar to help prep us for TdV. Although I’ve been diligently training and listening to the advice of more experienced riders I still have ‘butterflies in my tummy’ even though this will be my fifth year riding the TdV.  Maybe it’s just excitement. See you on Saturday….