Happy (almost) BC Day! If you’re like me, the arrival of August is especially exciting because it means the Tour de Victoria is finally here. August 18 is the big day.

I’ve spent the past few months getting on my bike as often as I can to help prepare for the jump from the 45-km distance I’ve completed in past years to the new 60-km ride the Tour de Victoria is launching this year. With the amazing weather we’ve enjoyed, it was easy to avoid using the car to run errands, and I managed to really rack up some miles!

The Strava app on my iPhone, which I use to keep track of all my rides, tells me I rode 154 km in May, followed by 268 km in June, and then 350 km in July. That included my so-called “training regimen” — i.e. long rides involving stops at breweries. (Rewards work well for me!) For instance, in last month’s blog I described an epic weekend trip I did out to Sooke with some buddies where we stopped at several breweries on the way there and back, totalling nearly 110 km in two days.

Not all of my longer rides in July actually involved beer. Midway through the month I met up with my friend and fellow blogger Travis Paterson. We started riding the Tour de Victoria together several years ago, but he quickly moved up to longer distances. This year he is attempting the 140-km ride. I wrote “attempting” even though I know he will conquer it no problem. Check out his July blog about climbing the Observatory Hill three times in a row — something I don’t think I could even do once! 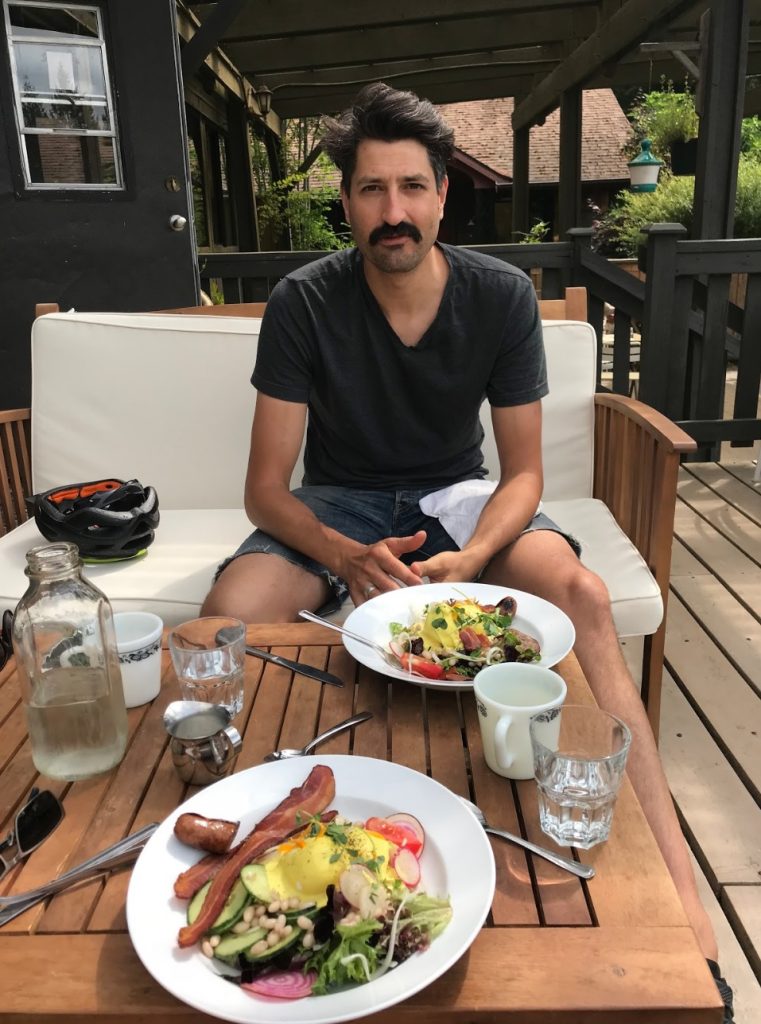 On our ride, we stopped halfway for lunch at Charlotte and the Quail, the comfy restaurant at the Gardens at HCP. It was a delicious meal, and rather than weighing ourselves down with beer, we got jacked up on coffee. All in all, it was a 32-km ride, not particularly long, but Travis pushed the pace above my normal cruising speed so it was definitely a good workout for me. 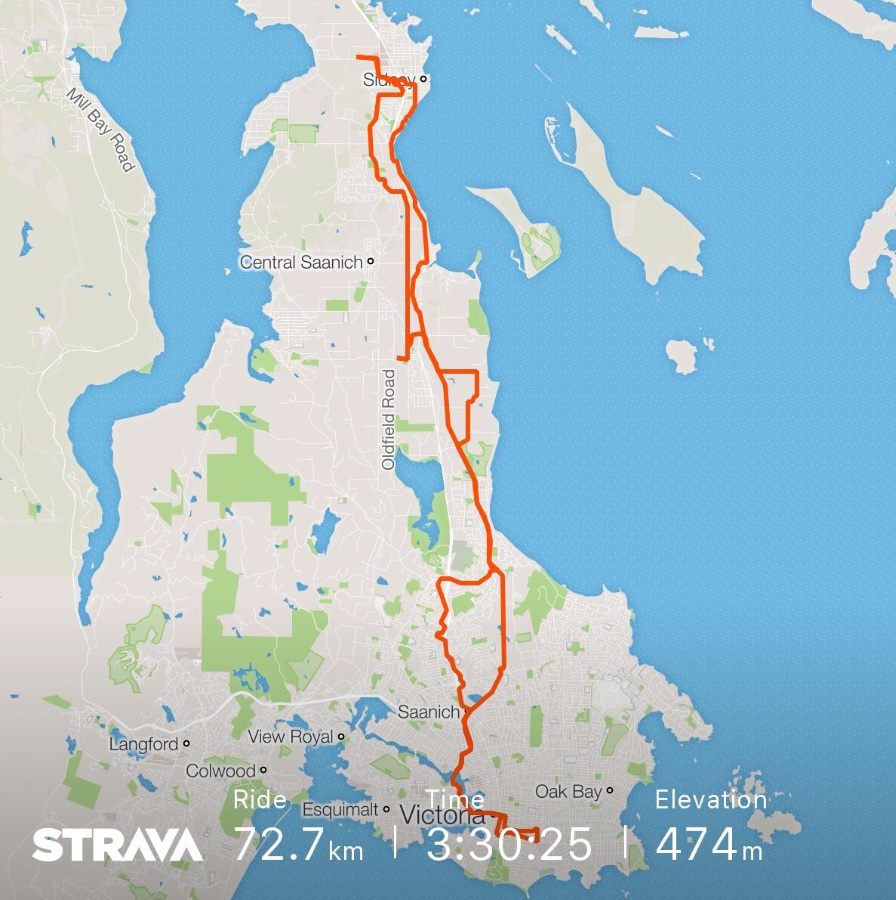 Later in July, I invited my brother Ed and a couple of friends, Chris and Mark, to join me on a ride up to North Saanich to check out a new brewery, Howl Brewing, that opened recently. A round trip of more than 60 km, this would be my longest single-day ride in recent memory, and it would definitely prove that I can complete the Tour de Victoria on August 18. 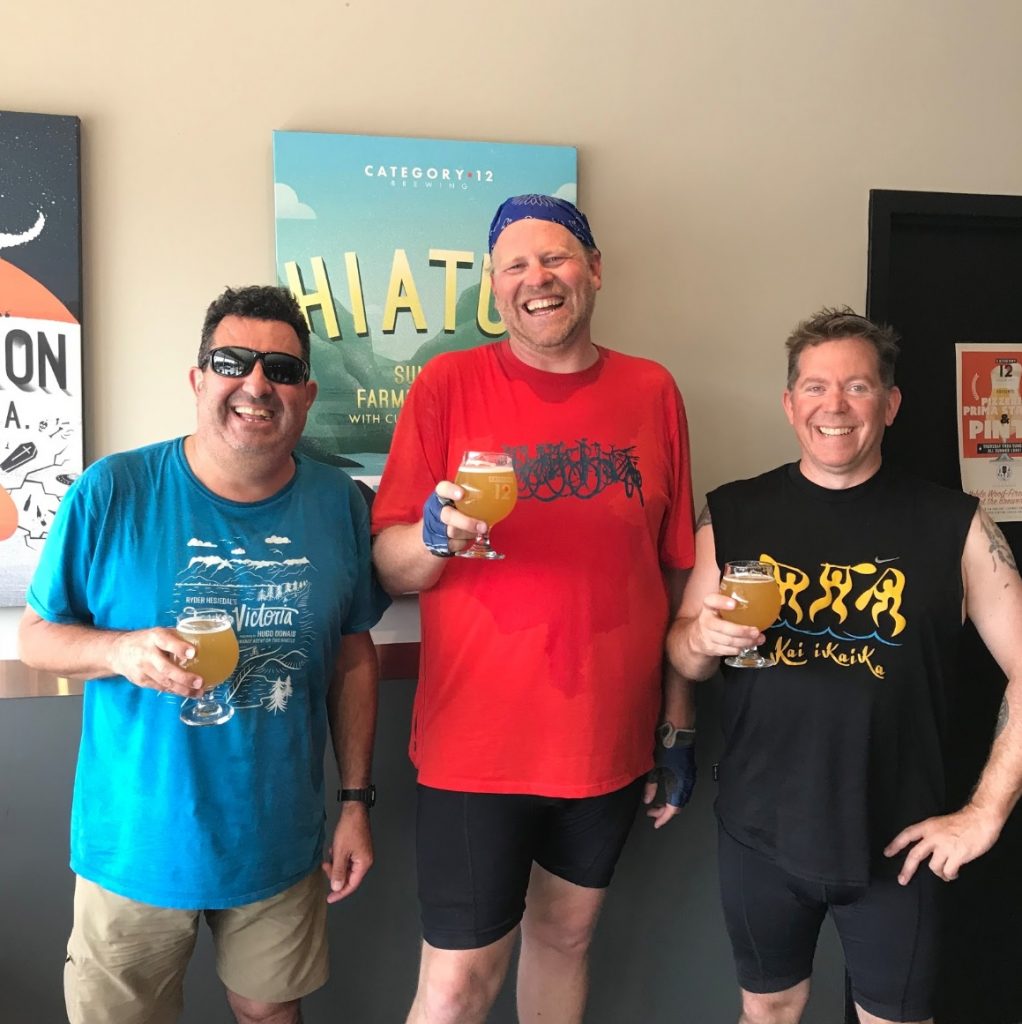 It was a gorgeous, hot Sunday, and we made quick time getting to our first “hydration stop,” Category 12 Brewing, conveniently located on Keating X Rd about halfway up the Saanich Peninsula. We made such good time that we were actually early and had to wait 10 minutes for the brewery to open its tasting room at noon. Although we didn’t eat, C12 does serve pizza cooked on site by Pizzeria Prima Strada so it is a great destination on any cycling trip. 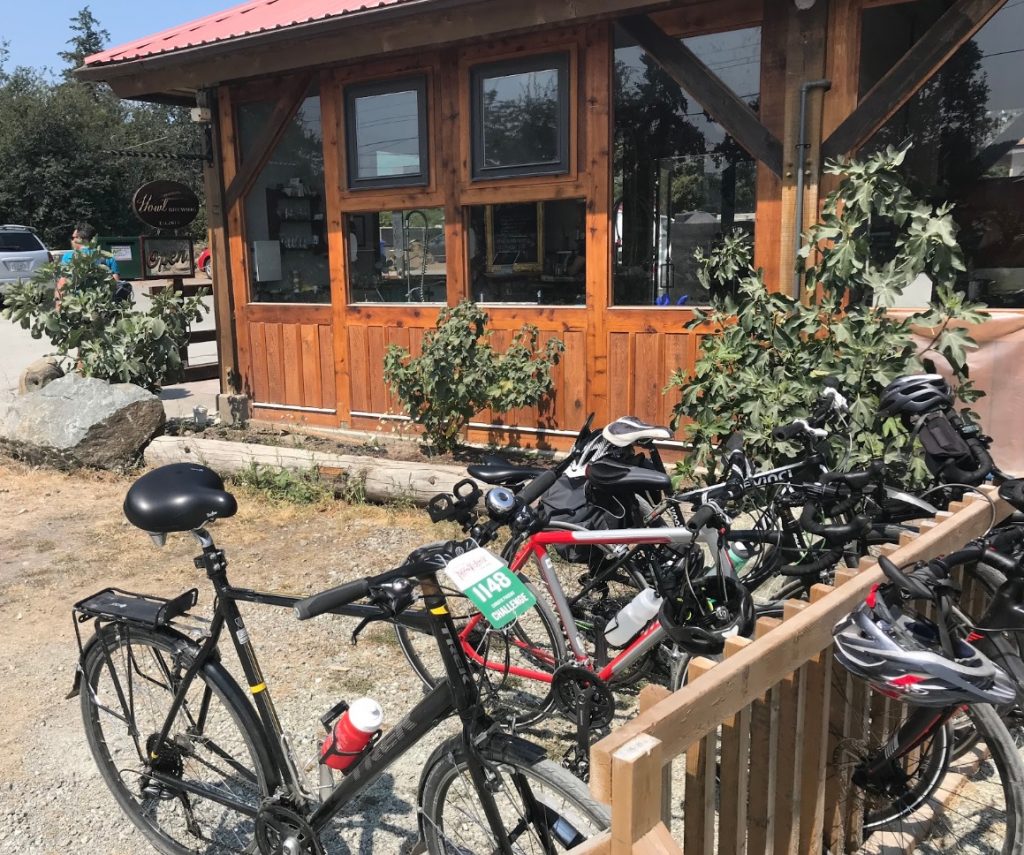 From there we rode up to the airport and then followed the “Flight Path,” a 9.3-km walking/cycling trail that encircles the airport. Next to the Fickle Fig Farm Market we spotted a sign advertising Howl Brewing and happily parked our bikes outside. This was the 37-km mark of our journey — and we still had to make our way home yet. 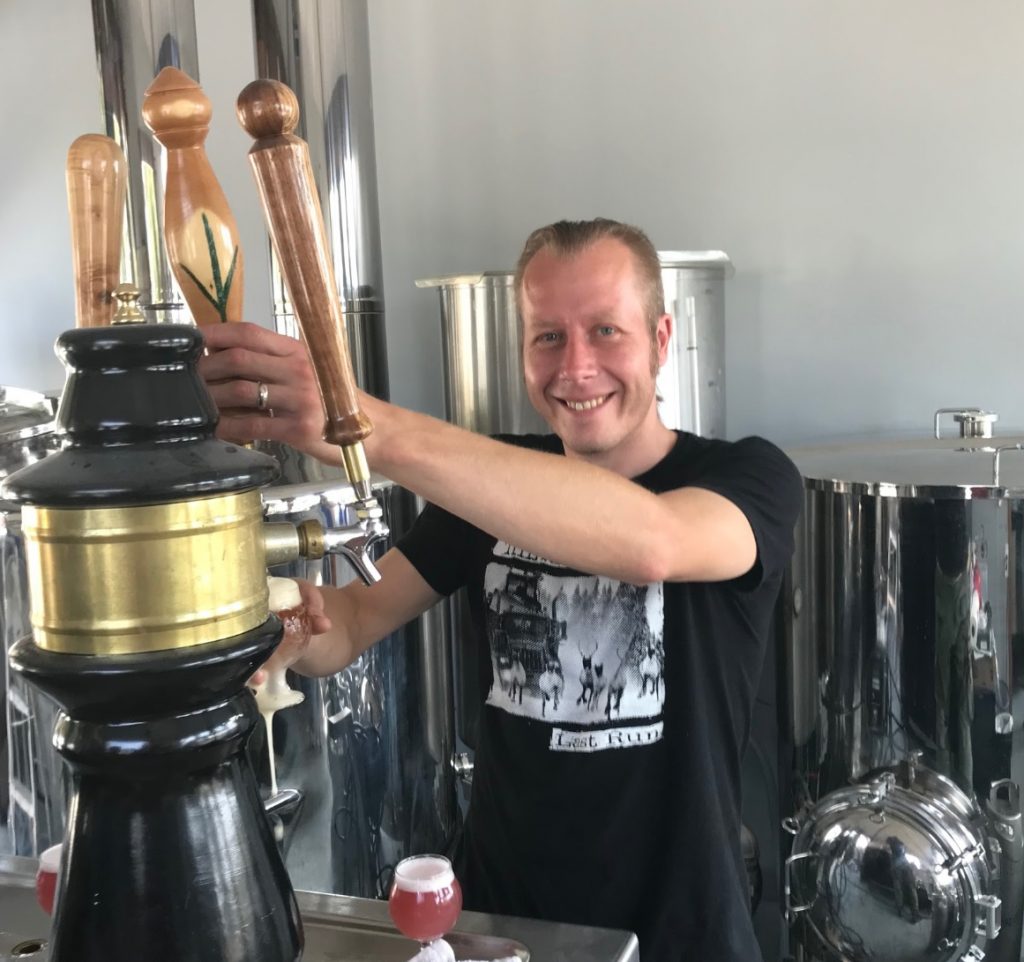 Howl Brewing is a tiny “nanobrewery” started by Danny Van Netten, a longtime bartender at Spinnakers Gastro Brewpub. Over the past several years he has bought and stockpiled used brewing equipment in his garage until he was finally ready to open Howl. 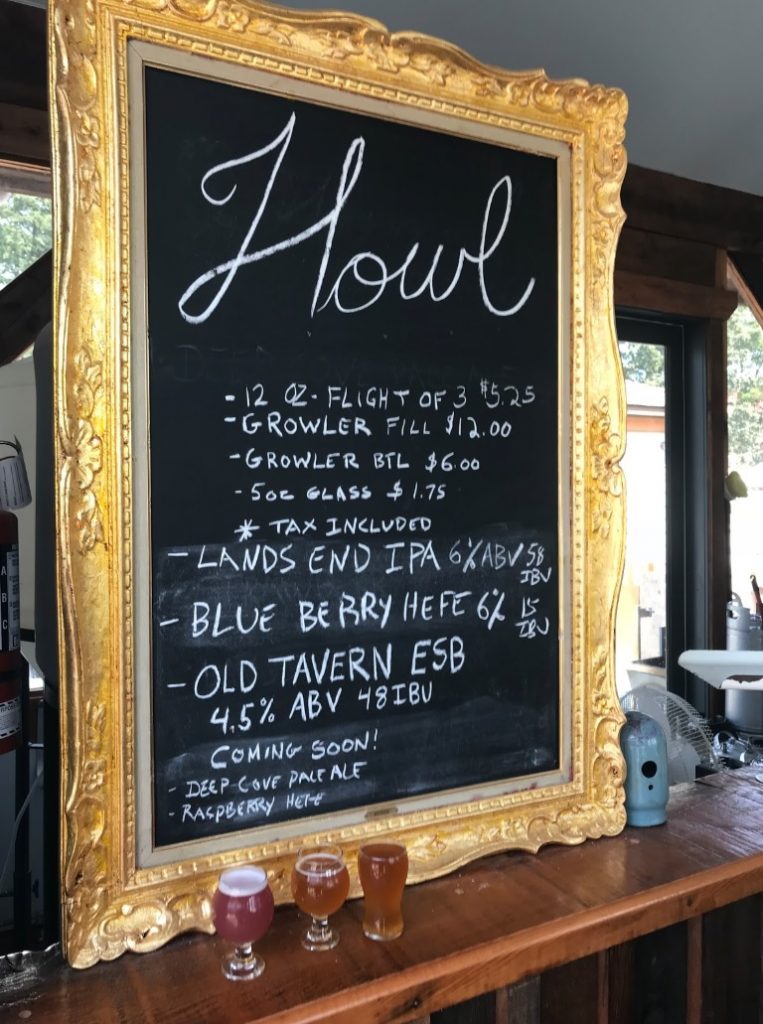 The beers were tasty — my favourite was the Blueberry Hefeweizen, and he also had an ESB and an IPA on tap for samples and growler fills. Eventually, Howl hopes to get a picnic licence so that people can enjoy food from the Fickle Fig next door along with a beer from the brewery, but for now you have to stand in the small “tasting room” area just inside the front door. 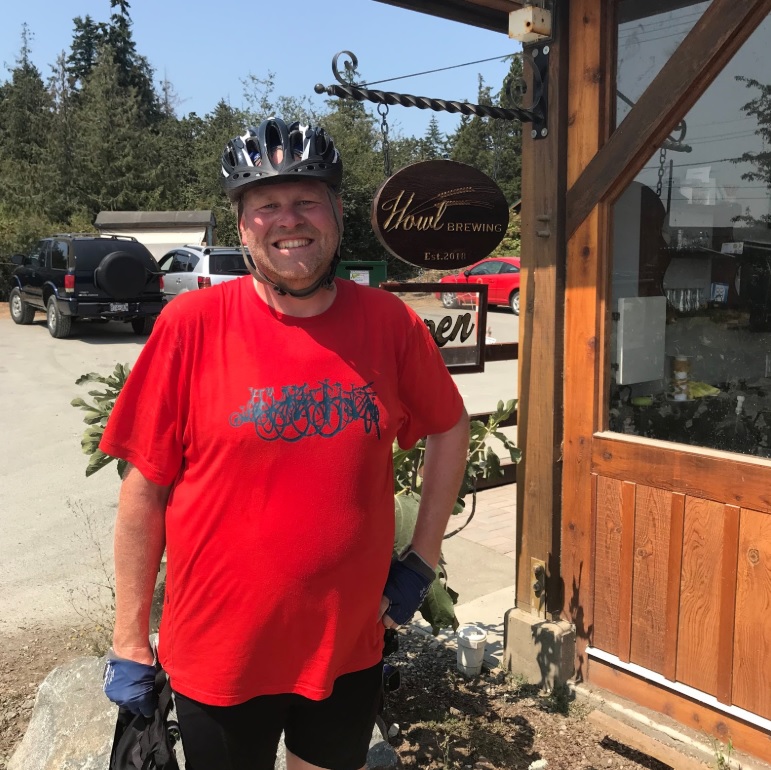 After fuelling up we climbed back on our bikes and began the long ride home. First, we crossed over the highway to Sidney so we could ride along the coast (just like the beginning of the 45-km ride from past years). At Royal Oak some of us chose to go back over the highway so we could visit Victoria Caledonian Brewery & Distillery.

By the time I got home, I’d cycled 72.7 km, a new record for me. I felt surprisingly good, and was able to get back on my bike immediately the next day without too much soreness. All in all, this bodes well for the 60-km ride facing me on August 18. Nonetheless, I still intend to ride the route once before the big day just to make sure I know what to expect. After all, I hear there are a couple of killer hills on the route…

All I know for sure is that the reward at the end of the ride will be an ice cold Tour de Victoria Kolsch from Spinnakers, which is served at the finish line to all of those (of legal age) who want one, along with a hearty meal. 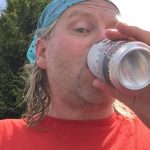 Posted in Blog and tagged bike training, tour de victoria, training
← When injury slows down your trainingThe Tour de Victoria is here, no turning back now →