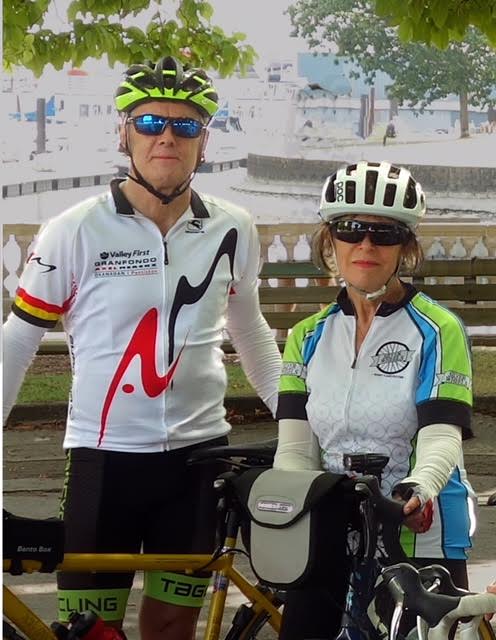 My name is Sandy Fleming and my wife Kim and I are from North Vancouver – both of us have ties to Vancouver Island.  Kim was born and raised in Duncan and my family was Navy –  growing up in Esquimalt.  So, returning to Victoria for Ryder Hesjedal’s Tour de Victoria is a bit of a homecoming for both of us.

We are both retired so have more time now to cycle in general and to prepare for the TDV.  We ride with the Silver Wheels, a cycle club registered with the West Vancouver Senior’s Activity Centre and we also train and ride with the TaG Ride Club, located in North Vancouver.

The Silver Wheels is mainly a social ride club but of course when you have a group of cyclists, the pace to the mid-ride coffee stop often becomes more competitive than “social”.  Silver Wheels has 80 members and 35 of us are registered for the TDV this year, up from 20 last year (I’m the team captain).  TaG is a training and competitive cycling club originally formed by Leslie Thomlison and Gina Gran with a focus on training, skill development, and competition for both road and mountain bike.  TaG has a great indoor studio and started an outdoor ride club just last year, with well over 100 members now.  TaG expects to have over 50 riders at the TDV as this will be the primary club event for outdoor training this year.  So nearly 100 North Shore riders are coming to Victoria for the TDV!  I’m torn which club jersey to wear – last year I rode wearing my TaG jersey and switched to Silver Wheels for the beer garden.

I have participated in the TDV for the past 6 years, only missing out on the inaugural event in 2011 and riding the 140km route every year.  Somehow I’ve improved my time each year, including the very wet and cold event in 2013, but not sure if that record will continue.  Kim accompanied me every year and was my cheering section the first two years, but then decided that riding would be more fun than watching, so she has ridden the past 4 years, including the 90 km route the past two years – 100 km this year.

Our club rides are typically 50 to 80 kms, 3 times per week weather permitting, so we get in around 200 kms of riding per week with a bit more when we get closer to the TDV.  We expect to be doing lots of north shore rides over the summer plus some endurance rides with TaG to get ready, and maybe some extra long rides on the weekends.

I have ridden in other Gran Fondo’s and similar cycling events, but have found the community spirit, organization (beer garden!), and great routes makes the TDV the most enjoyable one we have participated in – especially the families who sit at the side of the road cheering you on.  We have encouraged other cyclists we ride with to try the TDV, especially for their first mass cycling event, and many of them have also returned for subsequent years.

So we’re off to England for a vacation now – with some easy rides in the countryside planned.  We will have some conditioning catch-up to do when we get back!

Posted in Blog and tagged cycling, cyclists, north shore, riders, tour de victoria
← Travis Paterson gets serious with the Harbour Air 140kmFinding a training incentive can make all the difference →