We are back from 3 weeks in England including 9 days of cycling in the Lake District and the Cotswolds.  The bikes were not quite what we are accustomed to (hybrids mostly) and the roads and paths were definitely not what we usually ride but there was lots of challenging terrain, even by Munn Road and Esquimalt Lagoon standards. 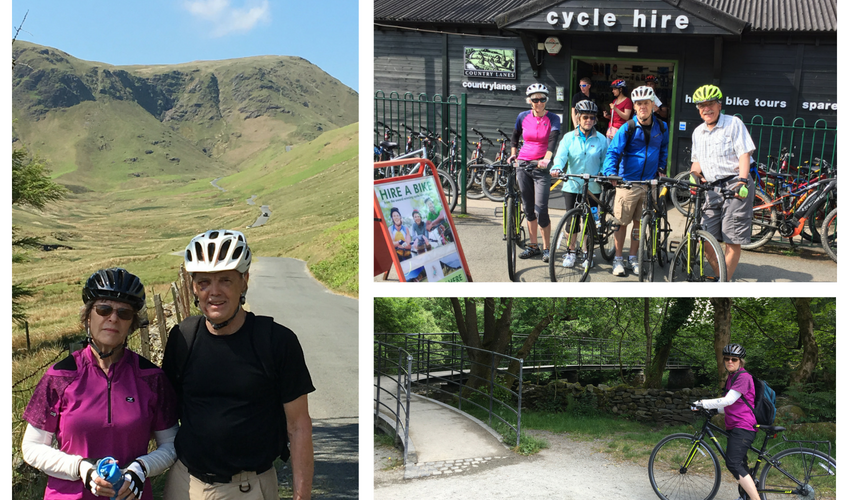 We were able to get in over 400 km’s of cycling both on and off road during our trip and while not adding to our training plan for the TDV, at least when combined with upwards of 25,000 “steps” during our typical sightseeing days, we maintained whatever fitness we had before the trip.

The roads in England were narrow, windy and definitely not flat, but on the whole the drivers were very courteous and gave us sufficient room on the road.  We tried to stay off the “A” roads as much as possible except when we traversed between Windermere and Keswick in the Lake District, and of course we avoided the Motorways.  The “B” roads were pretty good, but narrow, and the surface was typically rough with a lot of chip seal.  The “A” roads often had a bike path beside the road or allowed riding on the sidewalk to stay off the narrow (by our standards) roads.  The national bike path system also allowed us to rely on small local paths to a great extent.

Some of the signage could be a bit confusing, though: 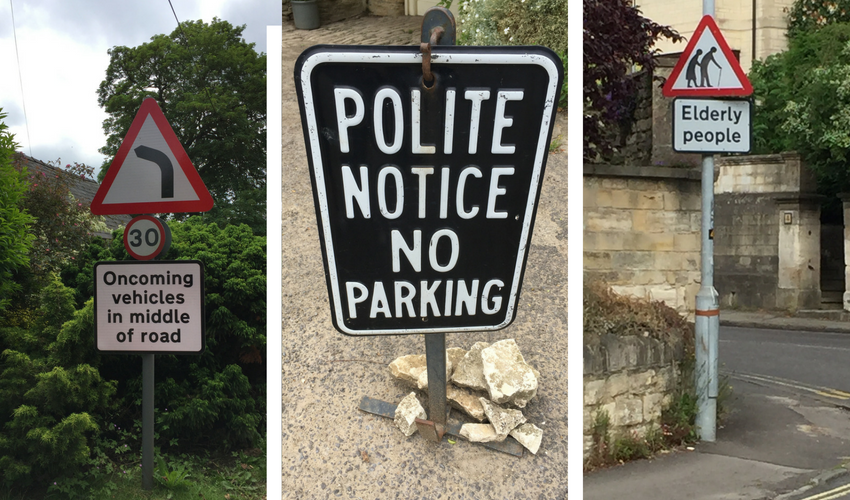 The Lake District had a lot of gravel paths and off-road excursions and the roads seemed to follow old sheep paths straight up some local “mountain” ranges (OK – hills).  Even with mountain bike gearing, we must admit to walking the final few feet over the 25% climb of the Newlands Pass between Keswick and Buttermere.  And the descent down the other side was quite entertaining – good test for our brakes! 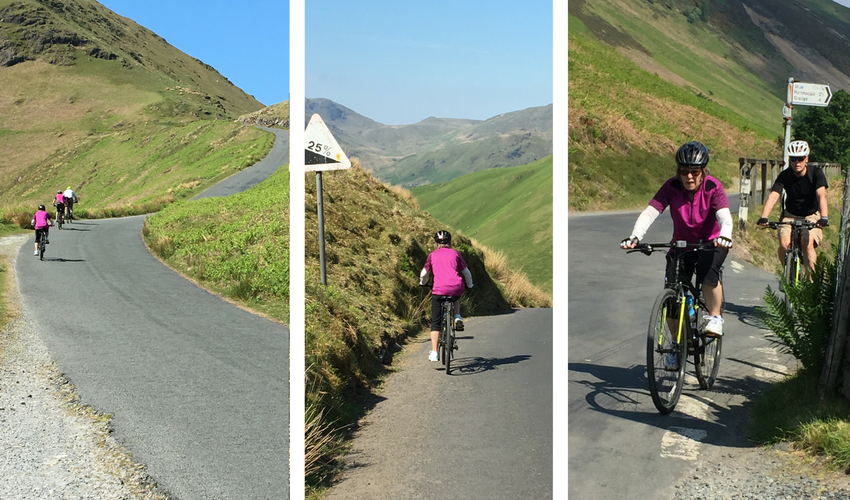 I was reminded however that I am not a fan of flat pedals and flat bars – a bit of a mishap while descending on loose gravel!

We also took one day to follow the Avon Canal tow path from Branford-on-Avon, near Bath, to the Caen Locks.  Luckily we had mountain bikes that day because the tow path was quite rough.  But a good day riding and the canal system is remarkable and surprising.  We also found a couple of very nice pubs alongside the canal (no surprise there).  The Caen  Locks are a continuous series of 16 manually controlled locks on the Avon Canal – it takes nearly 5 hours for a canal boat to traverse the locks! 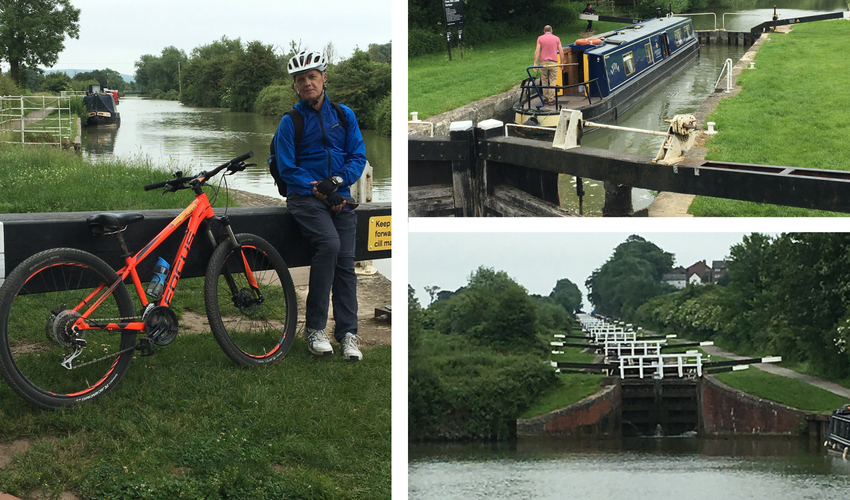 Lots of local pubs – it seemed that every village with more than a half-dozen houses had a pub as well, even if there was no other store.  The various market towns where we stayed had lots of good restaurants and eateries and we found the pub fare to be generally good and only around 50% more expensive than in Vancouver when exchange, VAT and service charges were taken into account. 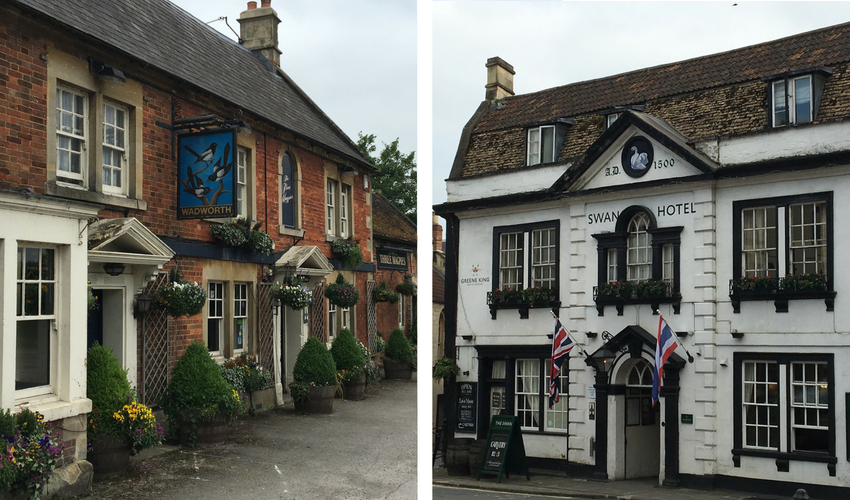 No sooner than we returned from England, to help get over jet lag we joined a number of our Silver Wheels riders for a 3-day trip to Victoria to sample some of the roads featured during the TDV.  This included the Seaside route and Metchosin Road to Sooke – taking some refreshments (and having a post-libations bean bag toss) at 17 Mile Pub. 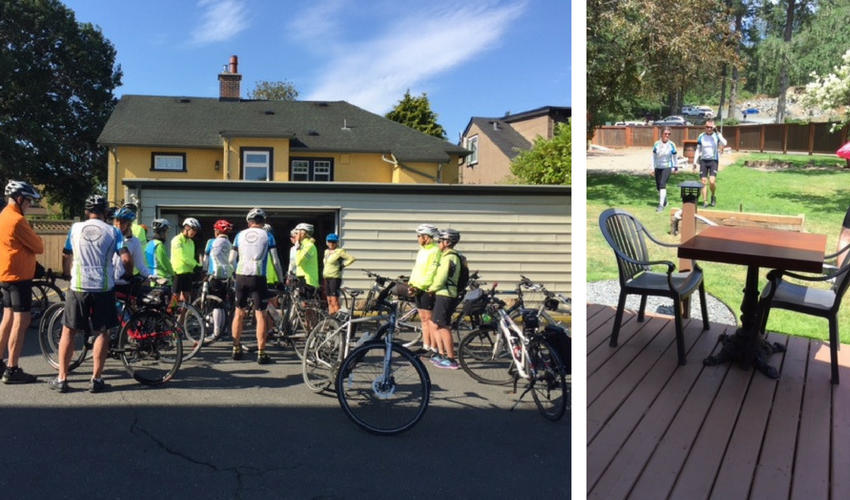 So now back to our cycling routine –  two days with Silver Wheels (mainly social riding ) and one day with TAG (hill climbing and pacelining).  We will be adding some extra longer distance rides as the summer progresses to gauge our hydration and conditioning in preparation for the TDV.